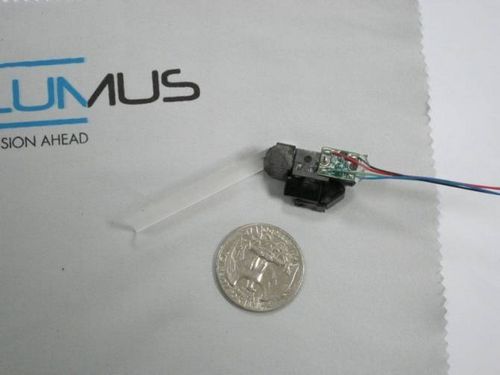 After showing off a duo of wearable, see-through displays at CES, Lumus is back with a second optical engine — one that could be used in any style of frames, from prescription glasses to ski goggles. Available in binocular and monocular configurations, the tiny OE-31 sensor weighs just 10 grams (.35 ounces), allowing it to accommodate a variety of form factors besides your run-of-the mill (and quite dorky-looking) 3D glasses.

As always, Lumus’ hook is its ability to combine head up content, augmented reality and see-through displays, though this time around the sensor allows for a 19-degree field of view and a full-color, 640 x 360 picture. Though that’s not as impressive as the 720p, 3D-capable frames on offer at CES, the company argues it should be adequate for reading text, particularly since the viewing experience will be comparable to staring at a 40-inch screen from 10 feet away.

No word, of course, on what products might incorporate these discreet head up displays, though maybe, just maybe, we’ll catch a demo in Barcelona. For now, we’ve got photos below along with a handful of demo videos after the break.